An open letter from Lydia’s toy Macey the Doll to her mother regarding her morning elopement to Aladdin the Doll on the morning of October 18, 2014. Dictated by Lydia’s father, who was in attendance as a signing witness to the union.

I should have listened to your advice concerning boys. Not that I regret marryingAladdin, but I do wish I had taken things slower and gotten to know him more before committing myself to him in marriage.

I should have realized the gulf of differences between us the morning when I proposed to him. His only reply was to awkwardly shuffle around in a circle and say something in a high pitched little girl voice about wanting to go to the grocery store to buy rainbow cookies. I persisted, of course. I was hopelessly in love and finally after several attempts he yielded, choosing my lifelong happiness over rainbow cookies (A choice I do not take lightly). But I now see that my advances were probably far too forward for a young man of Arabic descent. Imagine my embarrassment now? Just thinking about it makes me cringe. Imagine, a woman proposing to an Arabic man. I probably insulted him horridly.

But I didn’t know just how foreign he was. All I saw were his curved cheeks and exotic yellow kaftan. The peacock feather on his turban still makes me blush with innocent admiration. I adore his rich dark hair and his eternally out stretched arms, like he is soaring through life. I love him mother. I truly do. I promised as much at our wedding. With my flowers in hand, gazing deep into his black hamster-like eyes, when the minister asked me, without hesitation I said it. “I do!”. But no sooner had I promised my heart to him than, while the minister was still asking him for his promise, Aladdin interrupted. And instead of saying, “I do.” he instead replied with a question of his own. “Oh, did you know that I can do this?” I was in shock. “Do what?” I asked. And immediately he jumped into the air and fastened himself onto my head like a hat.

Just like that. Just stuck himself there on the top of my head. And, mother, do not be alarmed, but he has remained there atop my head ever since. He is still there now. Soaring like an eagle up near the ceiling as I write this. I haven’t even seen him since the wedding, apart from in the mirror and in our wedding photos (of which one is enclosed. Please share with Dad and the sisters.).

But please mother, do not think that I am unhappy. I am deliriously so. So happy I’m lightheaded. Ever since the ceremony I have been dizzy and falling over constantly. Part of that is because I am quite top heavy now, but it’s also because of happiness, I am sure. I have my wildest dreams fulfilled. I think. Dreams are weird sometimes.

Anyway. I should go now. He is saying something about wanting to go for a bike ride. 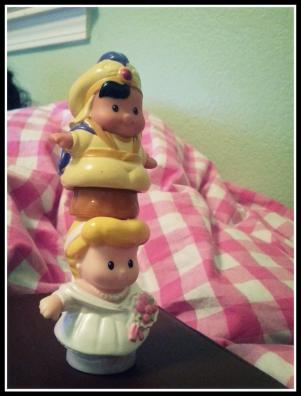 James Smith is the father of two wonderful little girls and a bubbly little boy. He lives in Alaska with his wife Andrea. During the day, James works as a civil engineer to support his wife who stays home to raise their children. This blog is a record of the moments that pass in the chaos of this busy life. They are the very real moments of fatherhood, as seen through the lens of the tired man at the bottom of the heap, struggling to keep his world in the air like Atlas.